Oil Spills For Dummies: Understanding the Complex Science Behind a Too Common Problem

We’ve all heard about oil spills. There’s a pipeline fracture off the coast, ecologists enter a state of panic, and whichever oil company is responsible for the spill starts pointing fingers at everyone but themselves. We see a menacing brown blob spreading into clear waters on the news. National Geographic depicts sea turtles covered in tar-like sludge and workers in jumpsuits scraping muck from white sand beaches. We’ve seen what oil spills look like on a macroscopic level; what many of us aren’t familiar with is the microscopic science behind them. Understanding the intricacies of oil spills may help gain perspective on how to solve this complex problem.

So what is oil actually made of? Typically when we talk about oil spills, we’re referring to the distribution of crude oils into marine environments. These compounds are made of hydrocarbons, hydrogen-carbon molecule chains that formed from decomposed organic material existing millions of years ago. “Crude” is a synonym for unprocessed, meaning the oil has been extracted directly from the earth in underground reservoirs and has not undergone any refinement. A more commonly known term for crude oil is petroleum.

The way that these oils behave in their environment and the effect they have on marine life depends largely on the chemical and physical properties of the hydrocarbon molecules that make them up. One factor to consider is density. When an offshore oil rig malfunctions or its pipeline fractures, the majority of the the oil released underwater will rise to the ocean’s surface. This is because the oil is composed primarily of hydrocarbons, which tend to be less dense than water molecules. At the surface, these crude oils form an oil slick, a layer of oil that can’t dissolve in the water it rests on. 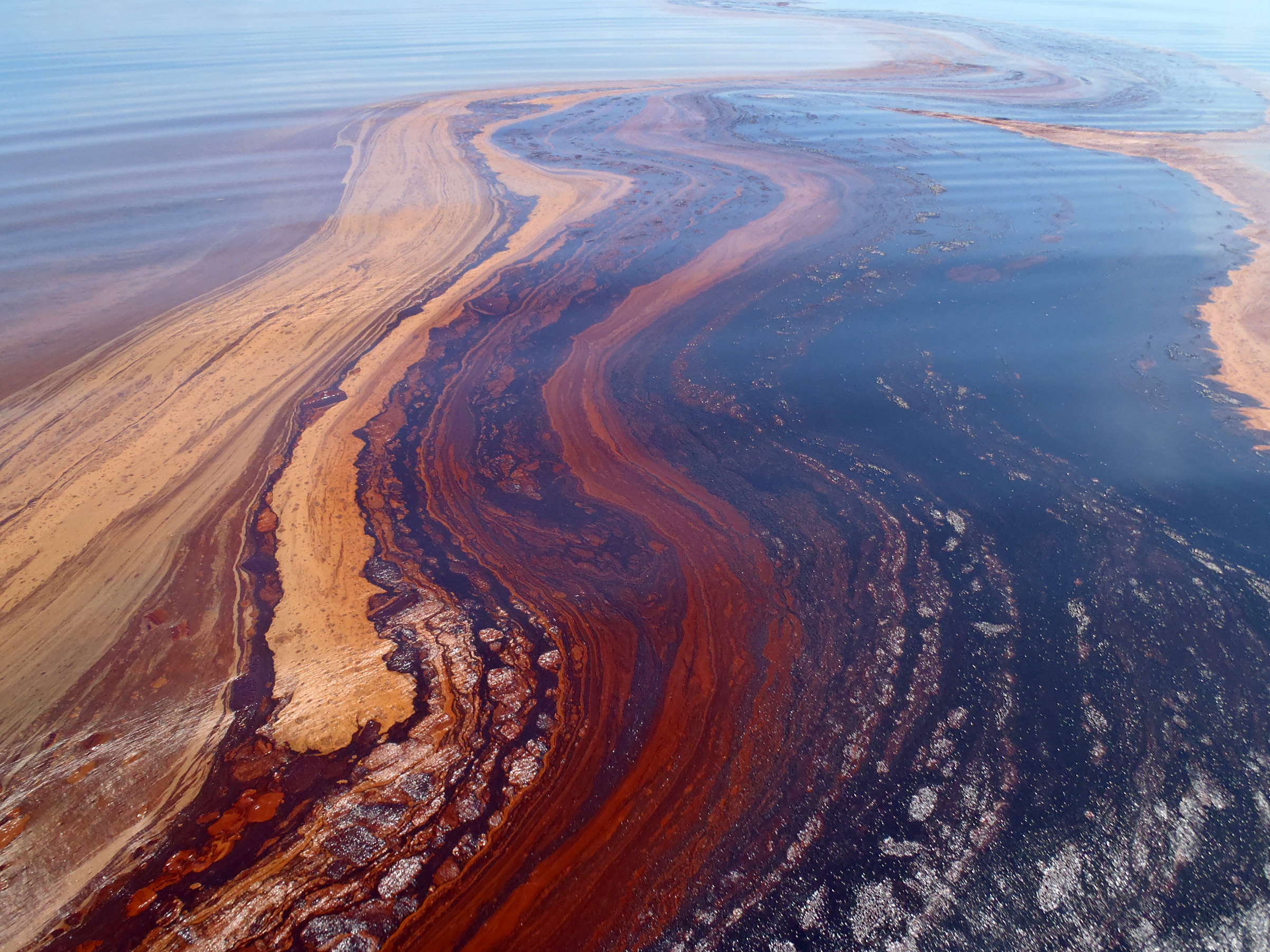 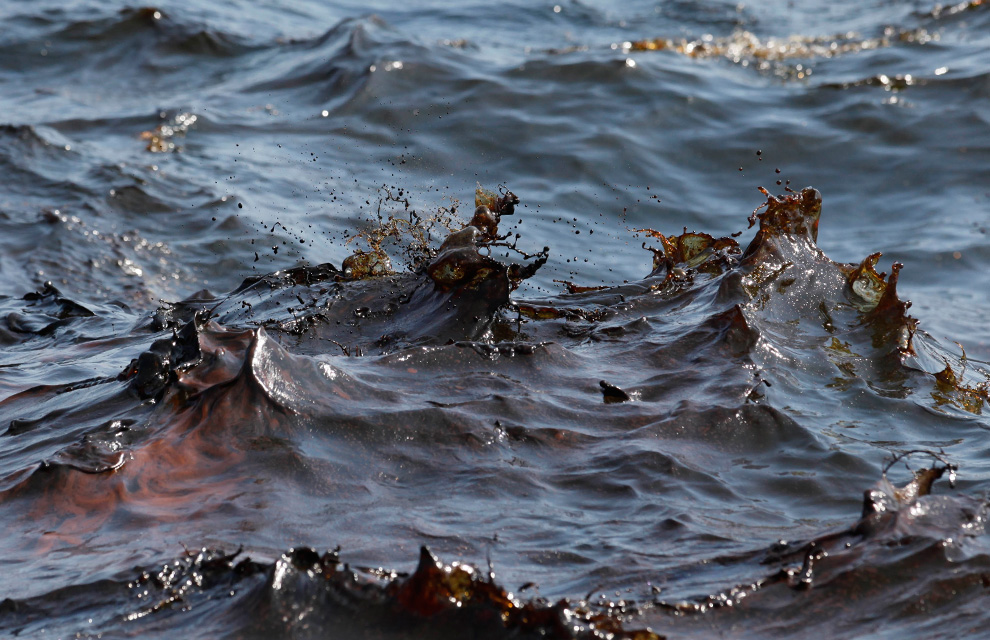 Once oil reaches the surface, two other processes begin to take place. As I’m sure you know, things like to spread out. When you pour juice into a cup, it naturally spreads out in the bottom of the cup until it can’t anymore. The same thing happens to oil at the water’s surface. The degree to which a particular compound can spread out is called viscosity. You can think of viscosity as thickness. Highly viscous oils will spread out slowly and less so, whereas low viscosity oils will spread out rapidly and much more so. In a 10-minute span after spilling, about 300 gallons of oil can spread to a radius of 160 ft to create a 4 inch deep slick.

In addition to spreading, oil at the surface can begin to evaporate. Volatility is the term chemists use to describe the ability of a compound to turn from a liquid to a gas, which is what happens to some of the oil in surface slicks. Unfortunately, evaporation creates another issue. When the molecules in liquid oil become gaseous, they then act as air pollutants above the ocean’s surface. This is a health hazard not only to humans when coastal winds carry these air toxins to shore, but also for air-breathing marine mammals like dolphins, turtles, and whales who come up to breathe air above the water.

Only so much of the oil in a spill can evaporate or spread out. So what happens to the rest of it? To answer this question scientists analyze the environmental persistence of various petroleum compounds, or the degree to which they remain in the environment without being broken down by natural means. Now we turn to several more chemical phenomena that explain this.

Though we tend to think of oil and water as substances that can’t mix, some of the oil sitting on the water’s surface will interact with water molecules to form what’s called an oil-in-water emulsion. This process can actually increase the volume of the oil present to nearly five times its original volume. Oil-in-water emulsions are very persistent in their environment, meaning they’re difficult to break down and eradicate.

Some of the oil molecules will combine with organic material nearby and become dense enough to sink below the surface. As these compounds sink deeper and deeper into the ocean, they become more persistent. All water contains microbes, microscopic organisms that will take in oil molecules, metabolize them, and spit them back out as less harmful substances through a process called biodegradation. 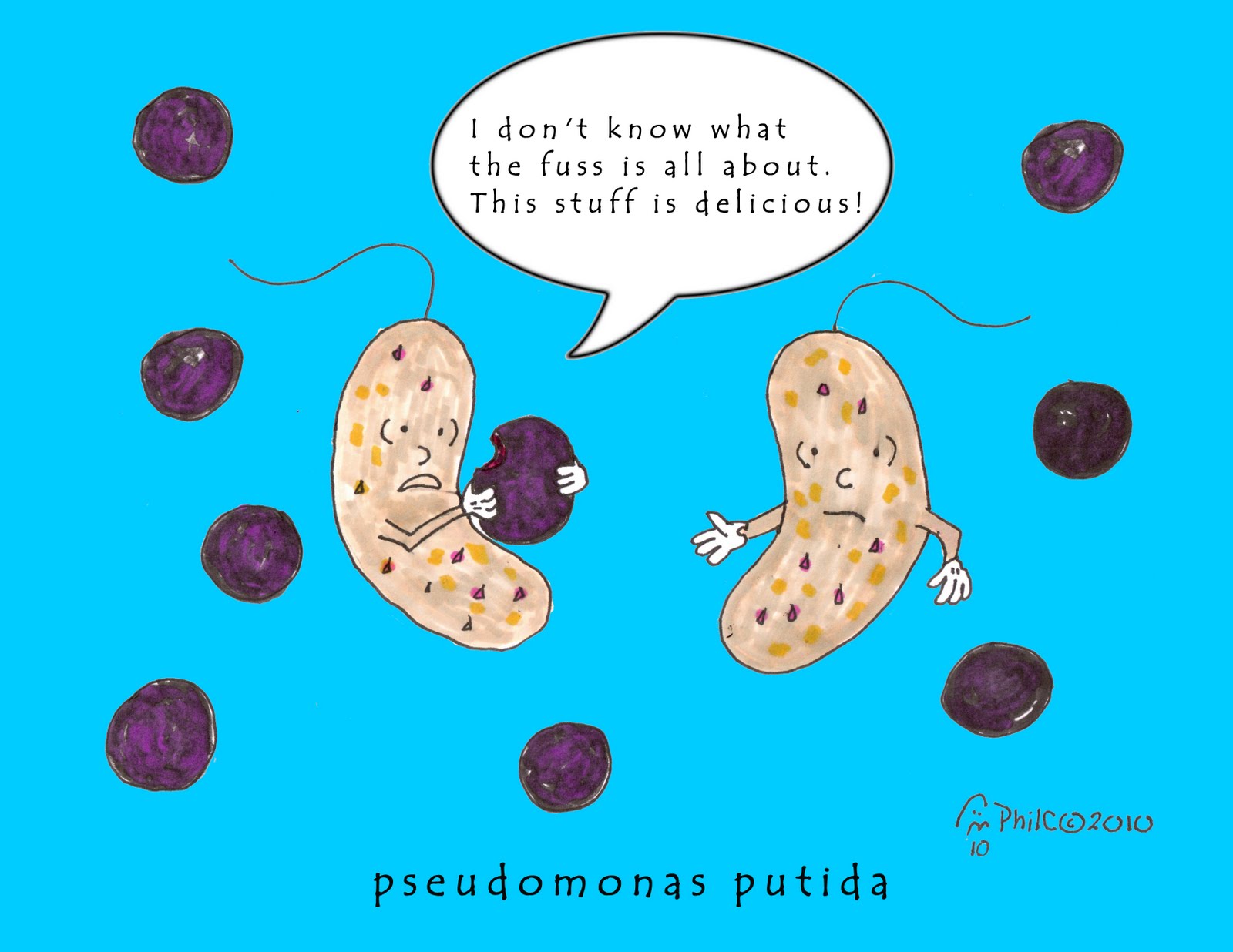 However, microbes need a steady oxygen supply to do this work. There is little oxygen present at the bottom of the ocean, so if these oil molecules travel far enough down, they become extremely persistent and form tar balls, black lumps of solidified crude oil. These tar balls often wash up on shore, posing threats to human and wildlife health through direct exposure to toxins. This is the fate of roughly 10-30% of the oil dispersed in a spill.

Oil that does not undergo the processes discussed above must be cleaned up by humans. There are lots of different clean up methods employed depending on what the situation calls for, but these efforts are both time-consuming and expensive. I think we can all agree that a better solution would be working to prevent these spills in the first place. Oftentimes when scientific articles are released for public access, the complex and convoluted content can prevent understanding of the larger themes at hand. I once spent three hours trying to read through a five page article on the chemistry behind arctic ice melt and walked away feeling like I knew even less about the issue than when I started, not to mention the seventeen tabs open on my laptop that I used to Google technical terms I’d never heard before. Unless you’re very familiar with the subject matter, it can be difficult to pick out the important bits from scientific publications.

It is important to understand the broader environmental issues addressed within them, but one can argue that it is also important at times to develop an understanding of the scientific intricacies behind these issues. While a lot of environmental work does take place on a broader, more social level, much of it examines the science behind natural processes and anthropogenic disruptions. Being able to connect these ideas with the role they play in the “big picture” of environmental work is essential in adopting a holistic understanding of human-nature interactions, and thus in understanding the most effective methods for addressing them.

Ellie Pumpkin is a second year student majoring in Environmental Sciences and minoring in Conservation and Resource Studies. Having grown up in a rural area on the coast of northern California, Ellie has a lifelong love for the outdoors and all of the life it encompasses. She is passionate about both writing and environmental advocacy and is excited to merge those interests in a student organization platform. Aside from trying to survive her lower division STEM classes, Ellie spends her time journaling, finding new music, making a mess in the kitchen, chasing sunsets, or planning her next camping trip. Ellie Pumpkin covers ecology.

GET TO KNOW SERC

The Leaflet: THE LATEST

This error message is only visible to WordPress admins


Error: API requests are being delayed for this account. New posts will not be retrieved.

Make sure this account has posts available on instagram.com.